After being puzzled by the cozy, bland, and formulaic nature of Netflix’s The Good Cop, most critics have concluded that the show is targeted towards a middlebrow audience that is nostalgic for a simpler era. Tony Danza plays the father/bad cop to Josh Groban’s son/good cop, they eventually solve the homicide case that comes their way, and a comforting jazz score takes you back to the aesthetics of a time when network TV stations did not have to work very hard to maintain their viewers’ attention. However, Variety’s chief TV critic Daniel D’Addario’s assessment that the show is “studiously inoffensive” is not entirely true. Whenever Asian American characters appear – in brief and marginal roles – they consistently reinforce Hollywood’s longstanding sexual racism. Asian women appear as potential romantic/sexual interests for the white male characters, while Asian men are decidedly non-sexualized.

In episode four (“Will the Good Cop Bowl 300?”), Tony Caruso Sr. (Danza) attempts to convince the tech-savvy Ryan (Bill Kottkamp) to keep up a potentially lucrative bluff. Ryan’s robotics technology was being used covertly to help TJ Caruso Jr (Groban) win a bowling tournament to solve a case, but TJ had become convinced that he was innately gifted. Tony Caruso Sr. knows that TJ can only maintain his perfect scores as a professional athlete if Ryan goes along with the scam:

Tony Caruso Sr.: Great news. I talked to Junior. He says you can go with him on tour as his ball boy.

Tony Caruso Sr.: It’s like a caddie, except for bowling.

Ryan: I already have a job.

Tony Caruso Sr.: I took care of that. I called the department. You’re on paternity leave.

Tony Caruso Sr.: Well, you knocked her up.

Ryan: Have you heard of Lance Armstrong, Mr. Caruso? 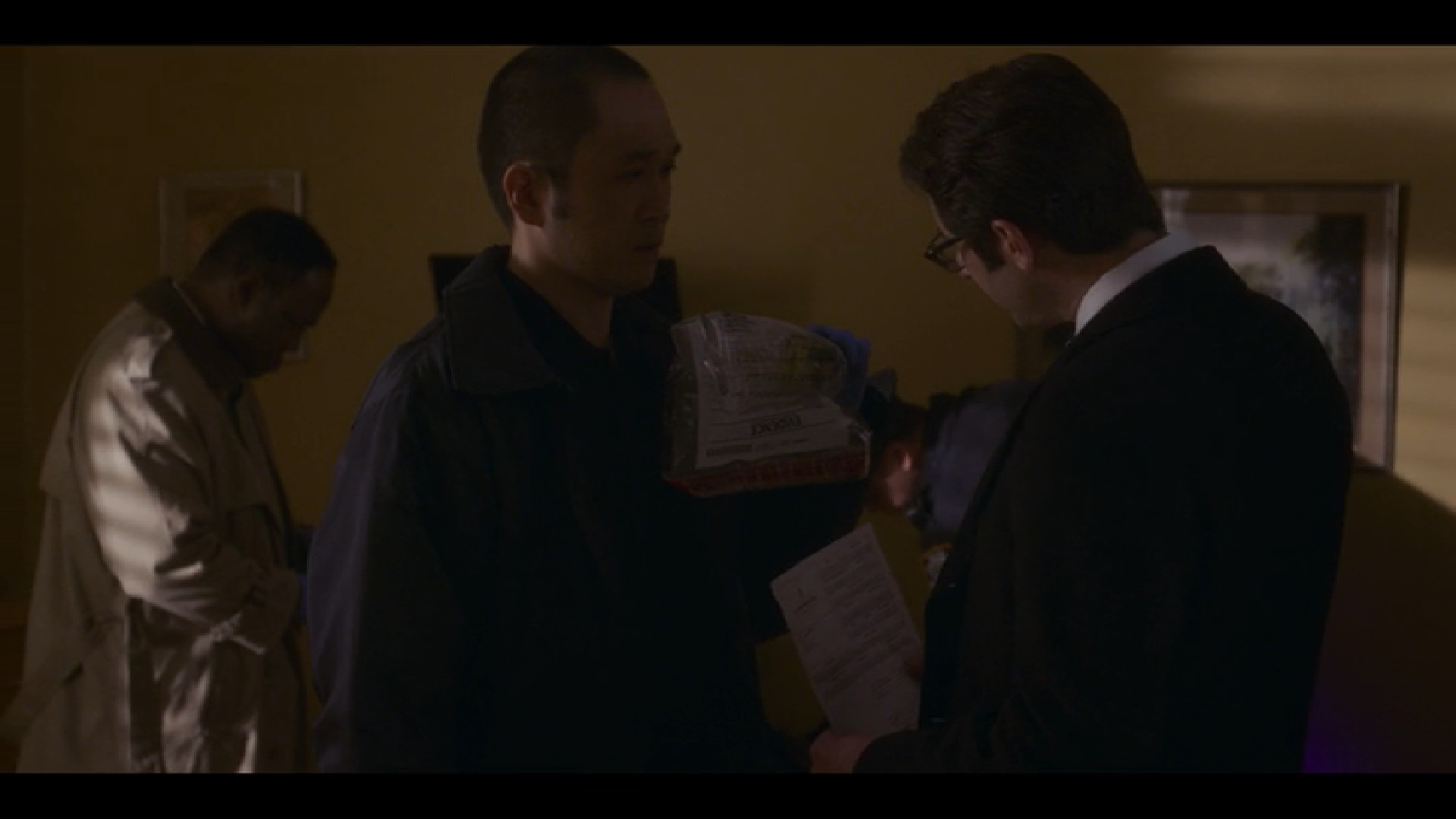 In episode seven (“Who Killed the Guy on the Ski Lift?”), an Asian American woman finally appears on screen. Angel Pai plays the nameless “Attractive Woman” (according to IMDB) who abruptly realizes that the (white) man she is flirting with is actually married.

“Don’t let me interrupt you. I don’t know what he said to you, but he’s lying.”

In episode 10 (“Who Cut Mrs. Ackroyd in Half?”), Tony Caruso Sr. flirts briefly with two Chinese female acupuncturists while waiting for the man who murdered his wife to arrive. 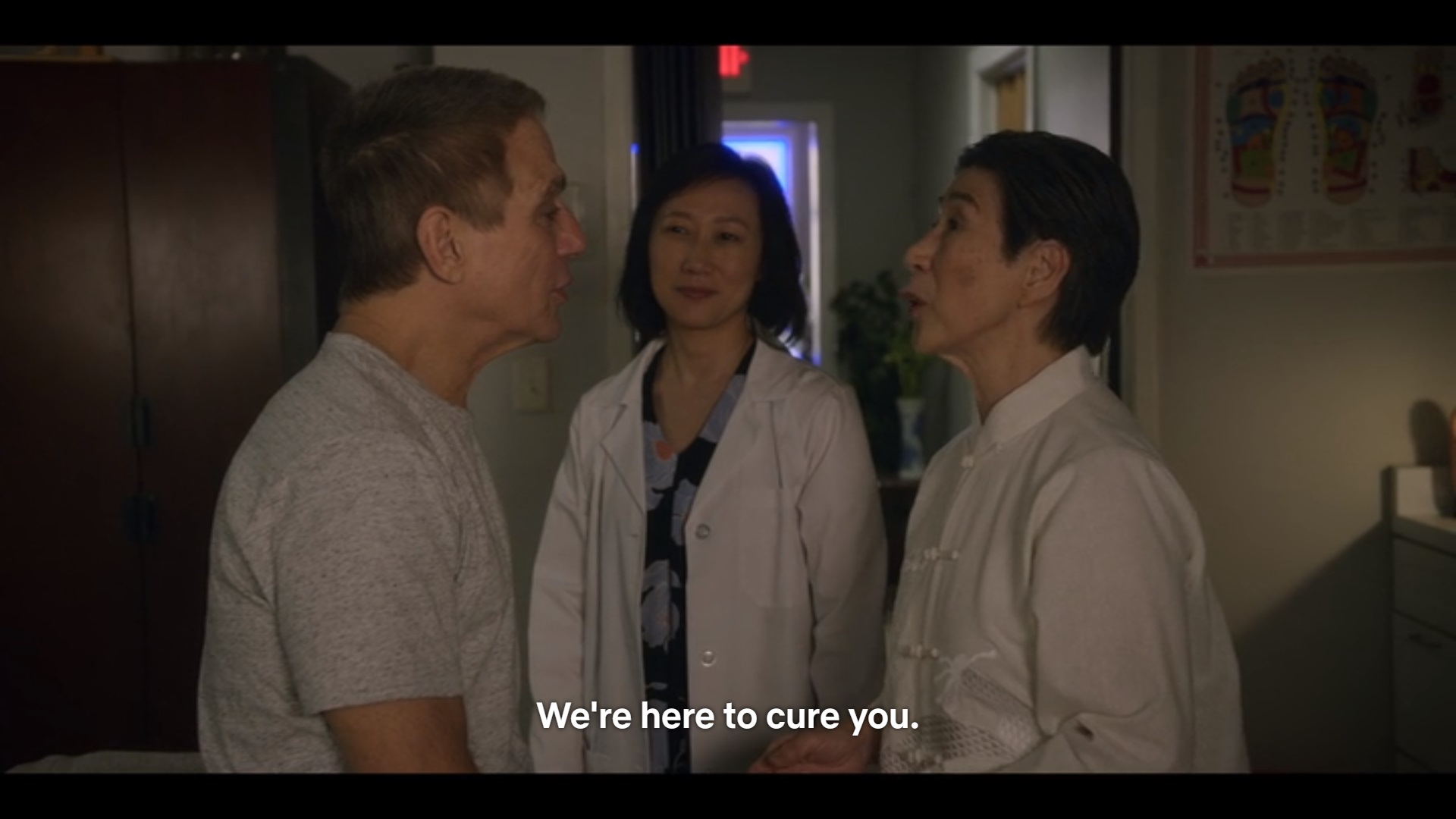 None of these brief instances of Asian American representation on the show are overtly offensive by themselves, but they collectively create an old Orientalist dynamic that subtly reinforces tired stereotypes. Once again, Asian American men are depicted in a marginal and non-sexualized manner while Asian American women are constructed as sexual beings that are categorically paired with white men. In a review of Asian American Studies scholar Darrell Y. Hamamoto’s 1994 monograph Monitored Peril: Asian Americans and the Politics of TV Representation, critical race theorist George Lipsitz raised a question that, unfortunately, remains relevant today: “Given the infinitely plural and diverse ways of being Asian or Asian American, why do these exceedingly narrow frames appear again and again in commercial culture?”

Episode 10 reveals that Ryan has an Asian video gaming buddy.