Mozart in the Jungle is an Amazon comedy-drama web television series that was renewed for its fourth season on 30th January 2017. Based on New York oboist Blair Tindall’s tell-all memoir Mozart in the Jungle: Sex, Drugs, and Classical Music (2005), the web series showcases the interpersonal dramas, class politics, egos and eccentricities behind the scenes of the prestigious New York Symphony. 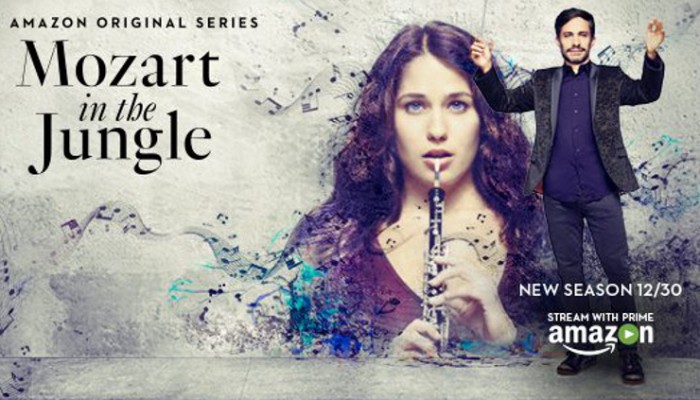 “In Mozart in the Jungle‘s fake New York, almost none of the players we see are Asian — whereas in reality, many American orchestras have a significant number of players of East Asian background and descent. But the character of Asian descent given by far the most screen time in the series is Sharon, the weirdly subservient and sycophantic administrative minion who figures heavily in the first couple of episodes. One of her big moments is rushing to clean up some parrot guano with her own clothing — scrubbing off Rodrigo’s shoe, no less. The pileup of ugly stereotypes gives me the heebie-jeebies”.

There are East Asian musicians in the series fictional New York orchestra, and some of them are even granted a few lines in several scenes throughout the series. Besides Mexican actor Gael García Bernal’s eccentric new conductor Rodrigo, however, all of the main cast are white characters played by white actors. The only Asian recurring cast member in the series is Sharon (Jennifer Kim) who appears in one thankless role after another.

She first appears as the outgoing conductor Thomas Pembridge’s (Malcolm McDowell) personal assistant, hovering behind him and passing him appropriate documents at the click of his fingers. Sharon appears to have no personal loyalty for Thomas, however, and is soon seen to be hopelessly devoted to Rodrigo (who replaces Thomas as the conductor of the symphony).

Towards the end of the series’ sexed-up pilot episode, Sharon is seen hanging onto Rodrigo’s every word as he holds auditions for new woodwind players at the Symphony. Suspense builds as the series’ lead female protagonist, aspiring professional oboist Hailey Rutledge (Lola Kirke) rushes to the audition hall to grasp the opportunity for a spot at the Symphony. When she arrives, it appears that the audition is over as the hall is empty and no one is in sight.

She plays to an empty hall anyway, and her playing interrupts Rodrigo and Sharon’s make-out session at the wings of the hall. Blown away by Hailey’s playing, Rodrigo pushes Sharon aside and rushes Hailey to Symphony president Gloria Windsor’s office (and shuts the door in Sharon’s face). This scene plays out despite no evidence of sexual chemistry between the two of them prior to this, and no further possibility of romance or sex between the two of them is established afterwards.

What is established, however, is Sharon’s “subservient and sycophantic” nature with regards to her superiors. This involves the typical duties that one would expect of a personal assistant – buying lunch and coffee, shielding Rodrigo from overly enthusiastic fans, making copies of music sheets, turning sheets as Rodrigo conducts, etc. But Sharon goes further, voluntarily rushing to wipe off parrot poop from Rodrigo’s shoe when he introduces his parrot as an ice-breaking tool in his first conducting session with the orchestra. 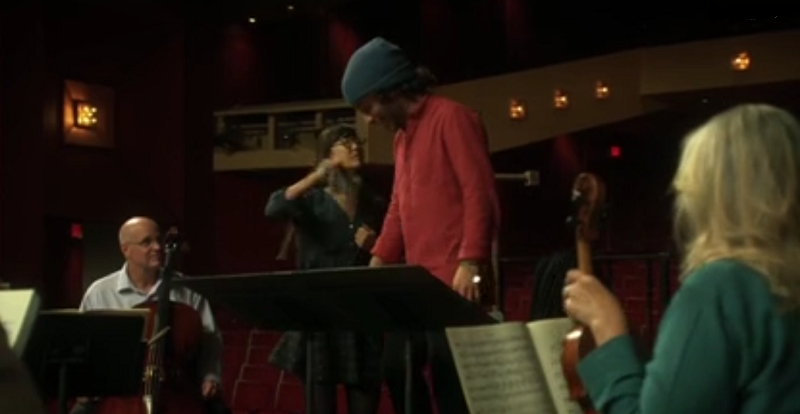 Sharon: I got it done, maestro. It’s all nice and clean. It’s my honour.

Sharon’s characterisation is further compromised in a scene in episode 3 of the series (“Silent Symphony”), where she – and an unnamed African-American administrative assistant – are presented as being mean and insensitive to Hailey (who humiliated herself during her first practice session with the Symphony, lost her job, and is back to ask for her paltry $89 check). Hailey loses her composure after witnessing Sharon mocking her to her African-American employee, and starts venting about how all the hours she spent practising does not warrant the callousness she just faced:

Hailey: How long have you been sitting at that desk practicing how to be a bitch and be rude to people? Maybe you’re just a natural at it!

Sharon’s character is never fully developed and presented with greater depth throughout the series. When she reappears in the final episode of season 2 (“Home”), Sharon has become the assistant/doormat to Edward Biben (Brennan Brown), a businessman and power-hungry orchestra board member who is scheming to replace Gloria as the president of the board and reinstate Thomas as the conductor.

Rodrigo: You know, it’s nice that we’re talking again. I kind of missed you, eh, Sharon?

Sharon: Yes, it seems like a million years ago since we were sucking face in the wings of the symphony hall.

Rodrigo: Sucking face, that’s just such a horrible way to say it. I mean, what, am I a fish with no feelings, or what? Why do you talk to me like that?

Rodrigo: So how long have you been working with the Biben?

Sharon: The Biben? Mm. Longer than I worked for you. He’s an incredible man. Yeah, incredible.

Rodrigo: Incredible at what?

Biben: Sharon, how hot’s it gonna be in Beijing Thursday night?

Biben: Am I still on for the Newfoundland meeting?

Sharon: Yes, we leave for Tetterboro in 15 minutes.

Biben: I’ve told you that before, right?

Sharon’s newfound indifference to Rodrigo does not last long, however. When Rodrigo agrees to step down as the conductor as a result of his negotiation with Biben, Sharon begins to sob.

Rodrigo: Sharon, what… what’s wrong? What… why are you crying, Sharon?

Sharon: I know. I just think you were the best conductor for our orchestra.

Rodrigo: Thank you, Sharon. Yeah, me too, me too.

When a character like Sharon is the Asian character with the most screen time in a webseries, is it any wonder that stereotypes of Asian women as being ‘naturally’ quiet, submissive, subservient and sexually available persist?