An ex-boxing champion is drinking away his sorrows in front of a TV screen. He has flashbacks of his beautiful female partner being kidnapped by a stereotypical evil Asian man in black. 0-1:00 minutes. The white male protagonist drinks himself away while watching boxing matches. He has a flashback where a woman (thought to be his lover) is kidnapped whilst he is helplessly pinned down with a gun to the head. The memories haunt him as he remembers a Cantonese speaking Asian man who appears to be a gangster boss. He says “beat him/her for me.” but the subtitles read “You work for me now”. There are more flash backs of how happy he was with his romantic partner.

The Asian man fulfills his Hollywood destiny as a villain, who is so immaterial that the producers can’t even get his one liner subtitled correctly. The disrespect is palpable. The flashback scenes build more sympathy for the protagonist until the producers decide a stereotypical Asian triad bad guy will ruin his life. 1:01 – 2:00 Back to the present, the video shows a random storefront/warehouse that looks very Asian. It is portrayed as a dodgy area with bodyguards around. 2:00-end. The protagonist enters a guarded warehouse over seen by the evil old Asian man and his Asian henchmen. A 1 v 1 fight between the White male and an Asian male fighter commence while the kidnapped woman watches. The White male protagonist is shown taken a beating but suddenly knocks the Asian male out with a “super move”. The gangster boss signals his henchmen to gun down the White male. Alas, it’s fruitless. The master race representative executes a flawless escape for him and his girl.

This illegal fight club establishes Asian men as bad guys who kidnap people’s partners to force them to fight. The ending shows that the White male was superior all along and “proved” that Asian males are weak regardless of all the previous strikes he did landed or the fancy moves that had no effect on the White male. Adding insult to injury to Asians, they make the antagonist triad boss seem like a sore loser, but it doesn’t matter because the White male is superior and saves his girl and himself.

This is a stereotypical portrayal showing Asian males as bad guys. This music video is basically “Rocky Balboa” saving his Adrian from an evil Asian man. 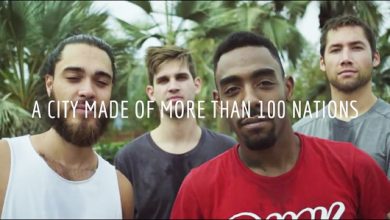 LA24 Campaign Ad to Host 2024 Olympics in Los Angeles Has No Asian Americans.