HBO’s Silicon Valley (2014 – present) appeals to critics and audiences by satirizing the technical wizardry and corporate machinations of the high-tech sector, while balancing the high-flying vocabulary of startup culture (compression algorithms, pivots, runaway valuations, toxic assets, etc.) with lowbrow humor. The television series thus includes plenty of dick jokes, jokes about geeks who can never get laid, and, unfortunately, as media critic Inkoo Kang argued in WIRED in May, a brand of racially-charged humor that fails to disrupt Hollywood’s long history of sidelining Asian masculinity.

The show manages to avoid coming across as being blatantly offensive by pairing its Asian supporting characters with morally ambivalent white frenemies. Jian-Yang, an app developer from China who speaks with an unmistakably thick accent (one that Chinese-American actor, stand-up comedian, and writer Jimmy O. Yang is clearly putting on), thus elicits laughter by engaging in a series of verbal jousts with Erlich Bachman (Jian-Yang consistently mispronounces his name as ‘Eric’): the show’s obnoxious, arrogant and morally bankrupt ‘bullshit artist’.

By having Erlich deliver one racially insensitive remark after another, the show attempts to exempt itself and its audience from its casual racism. Even Erlich himself appears to be ‘in’ on this form of ironic racism:

Erlich: I realize this is a Japanese tradition and that you are Chinese. I’m not racist.

Jian-Yang: Yes, Japanese people are racist. They are horrible.

Erlich: No, no. Jian-Yang, in every relationship, there are ebbs and flows.

Erlich: Yes. And although we have flowed, our relationship now has come to a permanent ebbing.

Erlich: No, no. We have come to a permanent ebb. Do you understand?

Jian-Yang: So you want me to leave the house?

Erlich: Yes, yes. Very much so. And so I thank you for our today. [Bows and passes kimono]. Now you bow. Bow, all the way – to the waist.

Jian-Yang: [Stuffs kimono into the sink shredder and turns it on] Hey! You like this?

Erlich: What are you doing?

Erlich: Who are you yelling at? We’re the only two people in the fucking house!

Jian-Yang’s outsider status is not only signaled by his heavy accent: he is also the only app developer living in Erlich’s Hacker Hostel who is not a part of the Pied Piper team. His initial appearances in the series were solely for cheap comic relief (mostly based on language and cultural barriers). Erlich treats him as a child, telling him to not “leave the fish head and guts and shit in the sink”, teaches him how to sort items into the recycling bins, and micromanages his daily routine: “Now, you are under no circumstances to order any movie on demand, adult or otherwise”.

His status as a perpetual foreigner is reinforced by Erlich’s diminutive, infantilizing and othering descriptions: “My beautiful little Asiatic friend”; “He’s from China, a small town, not used to our big-city liquor”; “We don’t enjoy all the freedoms you have in China – where people smoke all the time”; “You can’t just wiggle your little tush and expect every VC in the Valley to get hards-on”.

Jian-Yang is also oblivious to social cues and lacks a viable vision as a programmer, even though he is savvy enough to exploit a legal loophole to stop Erlich from kicking him out. His idea for his own app features a family recipe that his grandmother gave him before dying “in a horrible way”: “Question for you. What’s better than octopus recipe? Answer for you: eight recipes for octopus”.

In episode 4 of season 4 (“Teambuilding Exercise”), Erlich manages to spontaneously ‘pivot’ Jian-Yang’s unprofitable idea for a ‘Seafood’ app to ‘SeeFood’: a “Shazam for food” that can accurately classify images of food items. He negotiates a $200,000 deal for this non-existent product from a pair of venture capitalists. Jian-Yang is then ordered to program this application, but his work is ultimately only able to identify hot dogs (all other items are identified as ‘not hot dog’).

Jian-Yang rebels when he is tasked with the arduous task of ‘training’ the app to correctly identify all the other food items on the internet, but eventually comes out on top by another lucky accident. After Erlich uses the app to take a dick pic (“See, it says hot dog! It doesn’t even work!”), Jian-Yang manages another pivot and a successful exit. He resigns from Erlich’s control by relinquishing the Corvette (which he bought with the money Erlich invested in his app out of spite), and sells Periscope an app that detects penile images – one which he is credited for having “unwittingly crafted” – for $4 million. A similar pattern emerges for the other Asian American characters on the show. Kumail Nanjiani’s Dinesh Chugtai – an immigrant from Pakistan who specializes in Java programing – gets a seat at the Pied Piper table as member of the main cast, but endures a stream of put-downs throughout his time at the incubator.

Most of them come from his arch-frenemy Bertram Gilfoyle (Martin Starr) a deadpan Canadian Satanist and a proficient systems architect. When Dinesh purchases a gold chain, for example, Gilfoyle roasts him by calling him ‘MC Hamas’, ‘Chain the Virgin’ and ‘Pakistani Mr. T’. Even the typically earnest and empathetic Jared (Zach Woods) joins in on the fun, dropping ‘premium chain insults’ like ‘Django Unchained’, ‘Cyprus Halal’ and “Hey Dinesh, nice chain. Do you choke your mother with it when you put her penis in her butthole?”

Jared’s last joke manages to pale in comparison to Dinesh’s starring role in an ill-informed mural that the startup commissioned in episode 5 of season 1 (“Signaling Risk”). Erlich commissioned graffiti artist Chuy Ramirez to paint the tone-deaf $10,000 mural to boost Pied Piper’s street cred, and Dinesh ended up as an Aztec warrior in Chuy’s visual commentary “on the Latino struggle for justice in America”. Chuy mistook Dinesh for a Latino, and Erlich fails to correct him because he “didn’t want to seem racist”. When Erlich corrects his misperception, Chuy decided to impose Erlich’s face on Lady Liberty. 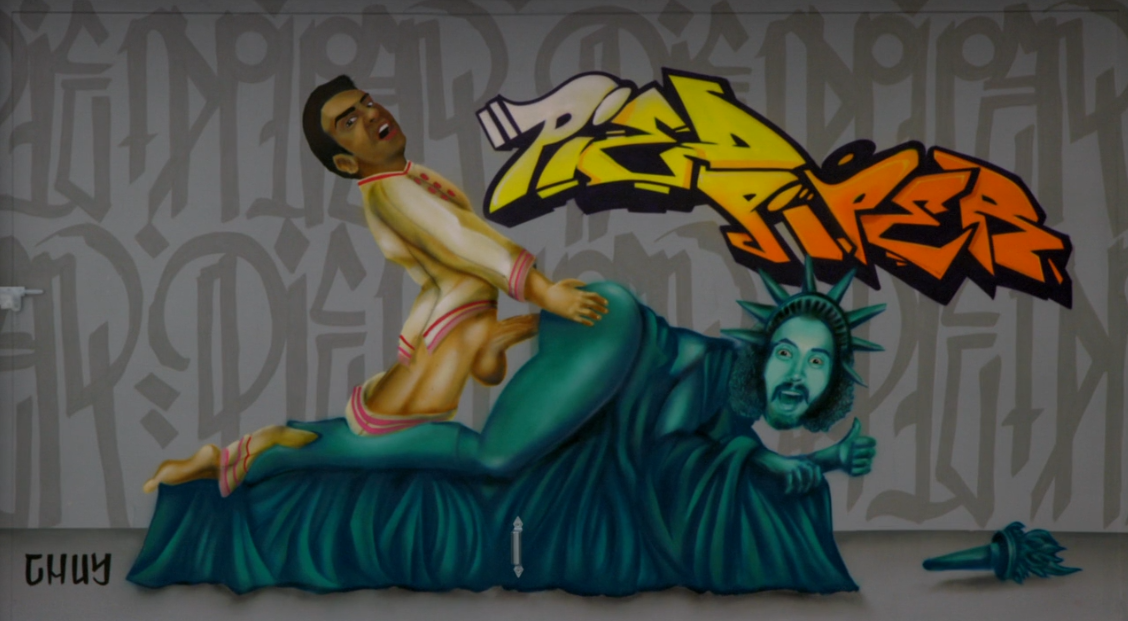 Like Jian Yang, Dinesh eventually gets a chance to shine. In episode 2 of season 4 (“Terms Of Service”), gets to trade in his typically sullen demeanor for the role of an obnoxious tech CEO when Richard (Thomas Middleditch) decides to leave PiperChat to work on his own visionary idea of a decentralized, peer-to-peer internet. The newfound power takes no time to rush to his head and inflate his ego: Dinesh is soon seen in a slick blazer with ample amounts of gel on his hair, alienating Richard, and boasting about his company’s statistics (“so sticky it’s pornographic”) while flirting with Bloomberg tech journalist Emily Chang (who plays herself).

Dinesh’s reign as CEO is remarkably short-lived, however. Midway through the episode, he can be seen curling up in a bathtub. By failing to take the Children’s Online Privacy Protection Act (COPPA) into consideration when finalizing PiperChat’s terms of services, he placed the company (and himself, since he neglected his fiduciary duties) under catastrophic levels of financial duress (a $16,000 fine per underage user per use amounts to a $21 billion liability). Disaster is averted when arch-rival and Hooli mogul Gavin Belson (Matt Ross) is inadvertently convinced to forcefully acquire PiperChat, leaving Richard to ‘nobly’ accept the responsibility for having handed over all his responsibilities to someone who swiftly proved to be incapable of handling them. 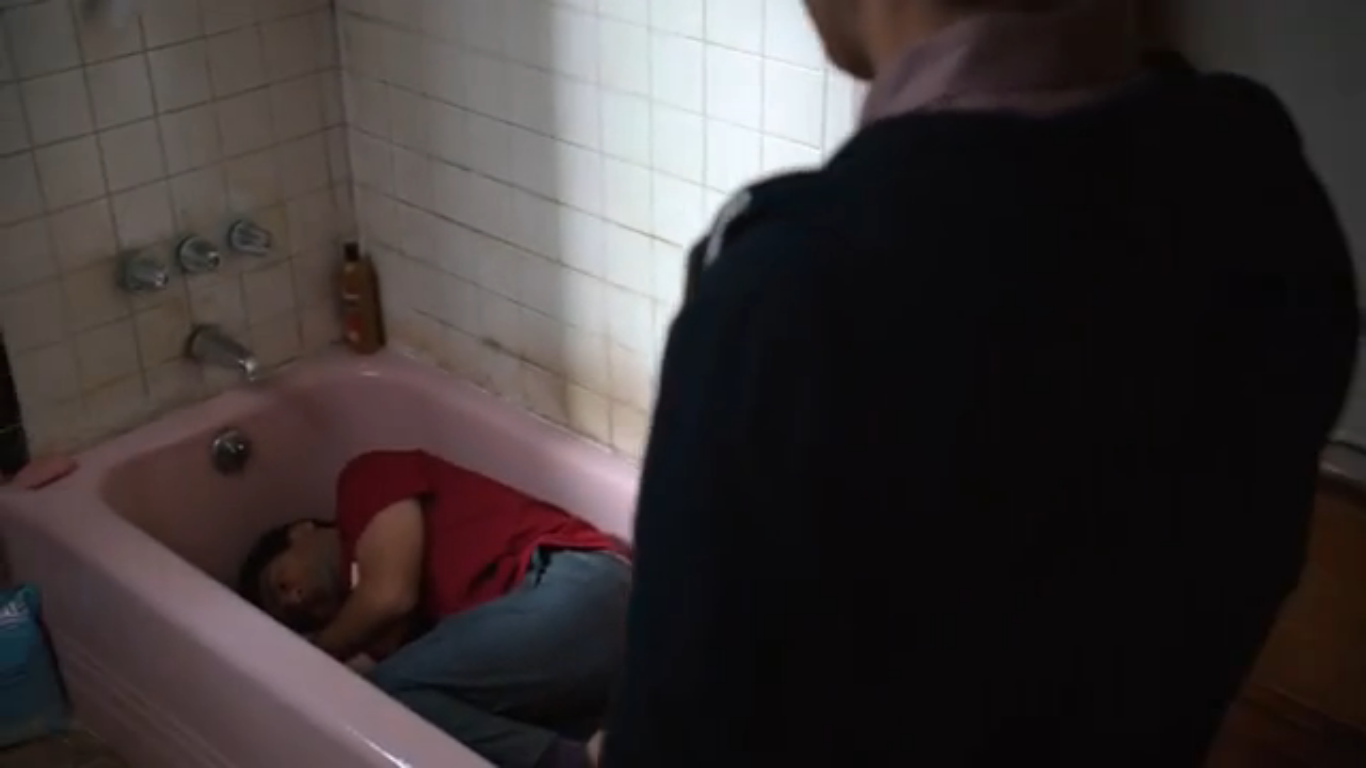 Silicon Valley may succeed in satirizing the prickly egos, personal eccentricities, outsized ambitions and interpersonal politics that characterize the real startup scene in the San Francisco Bay Area, but it provides little to no insight on its struggles with diversity. Dinesh and Jian Yang readily fit into existing stereotypes about Asians lacking the social skills needed for effective leadership in the tech industry, while falling squarely in line with Hollywood’s long tradition of playing up the perpetual foreigner stereotype for laughs (Jian-Yang shtick even made its way into a cast interview with Conan O’Brien).

The show does go (slightly) out of its way to point out that (white) women can be great engineers and a great director of sales, and that even socially awkward geeks like Jared and Richard have budding romances on the side. On the other hand, Jian Yang only cares about getting rich and seeking revenge against Erlich, while jokes about Dinesh’s chronic romantic desperation and sexual frustration spill over onto a real blog for the show’s fictional company: “Oh, Gilfoyle is telling me he needs to encrypt my computer “to limit the consequences of Dinesh’s inevitable sexual failure,” so I better sign off”. 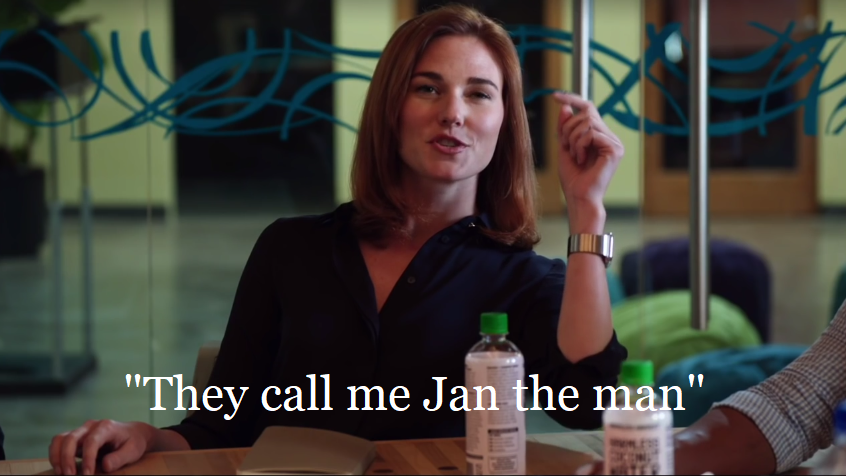 A prior subplot features Dinesh crushing on a remote coder in Estonia, who creates a fake boyfriend instead of confessing that she does not find him attractive after he improves Pied Pier’s video chat function. Dinesh finally gets laid in episode 3 of season 4 (‘Intellectual Property’), but his romantic success (“I did sex on her!”) is predicated on (1) Mia (Phoebe Neidhardt) contacting him after he accidentally got Gavin Belson fired for the PiperChat pedophilia fiasco and (2) their mutual disdain for Gilfoyle. Their relationship ends two episodes later, after Dinesh has the FBI arrest her for hacking access to the elevators at the Freedom Tower in New York City.

Dinesh double-crosses Mia once again in episode 9 of season 4 (‘Hooli-Con’), when he meets her in prison to obtain some specialized technical advice to pull off Richard’s unethical plan to infiltrate HooliCon’s server to install Pied Piper Dinesh in everyone’s smartphone. When she reveals that she has a plan to find out who tipped off the FBI and landed her in behind bars (“I think I can get online at the prison library. If so, I will track down who ratted me out. I will destroy that motherfucker!”), Dinesh casually tips off the prison security guard, leaving poor Mia to be confined within a maximum-security penitentiary. 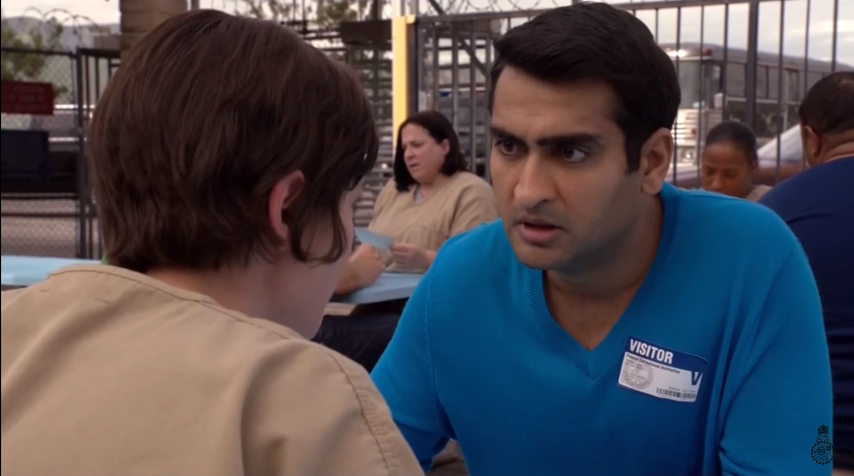 In an industry reserved for “the freaks, the weirdos, the misfits, the geeks, the dweebs, the dorks”, the Asian characters have to be the geekiest of them all, without really benefitting from the positive traits associated with these stereotypes (ingenuity, technical virtuosity, professional competence, etc.).

The exception that proves the rule is the minor character of Ed Chen (Tim Chiou), an employee at VC firm Raviga Capital who serves as Monica’s rival during the little screen time allotted to him. While Chen is portrayed as being ambitious, confident, masculine and savvy (the scene where Jared impersonates his machismo on the phone and the scene where Erlich makes up an excuse to opt out of playing basketball with Chen and his VC bros certainly flips the script), his rise to power comes with casually ruthless sexism. 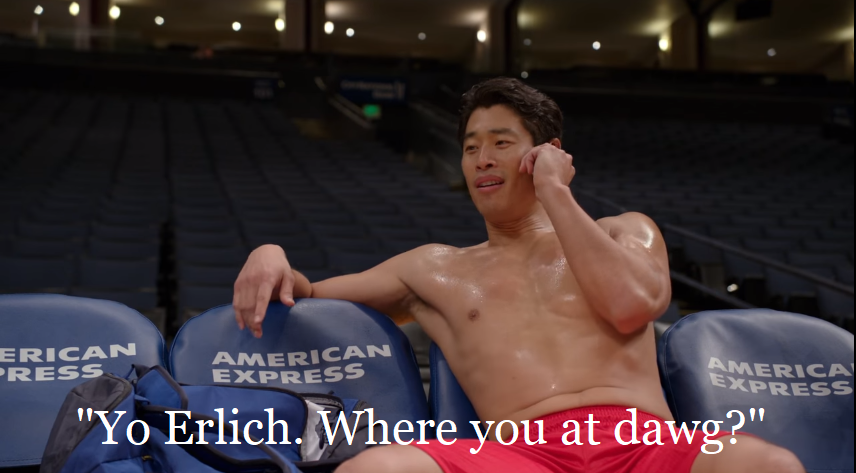 During a dinner meeting with Jian-Yang and Erlich, he boasted that he could “talk that broad [Raviga Capital CEO Laurie Bream] into anything”. After realizing that Jian-Yang did not have a working demo, he deftly has Bream place Monica onto the project, absolving himself of the responsibility. He then swoops in to claim the credit when Jian-Yang makes a successful pivot, claiming a promotion and Monica’s office in the process.

Later on, he can be found scheming to takeover Raviga Capital while Laurie is on maternity leave. Monica is forced to ‘bro down’ (doing shots, going on a weed run) with his misogynistic tech bros to avoid ‘going down’. She ultimately opts to leave the firm with Laurie, who was aware of the coup all along and invites Monica to join her exit strategy after she proves her loyalty.

Silicon Valley has been rightfully lauded for breaking new ground in satirizing the machinations and pitfalls that many fledgling startups undertake with hope of bloating into a unicorn. The way in which it naturalizes and commodifies the acceptability of casual racism against its Asian American characters is, unfortunately, almost as old as Hollywood itself.

George Takei gets Laughed AT in Taco Bell ad