In New Girl, the disturbing fantasy of the power brokers in Hollywood plays out. Here’s the background. CeCe is the best friend of Jess (the lead character on New Girl). CeCe is played by Indian actress Hannah Simone (she is half-Indian). Shivrang is the Indian fiancee of CeCe. Schmidt is the white male “top dog” (“Throughout the show he makes references to his Jewish heritage.”) Schmidt repeatedly strings CeCe along, has sex with her, and as you’ll see: continues to do this AFTER she’s engaged to Shivrang. The Asian male is emasculated on this show and as usual, the white male is seen as the “boss” in our social lives – unaccountable, selfish, and ultimately engaging in whatever relationship he wants with whomever – not only getting away with it but loved for it. 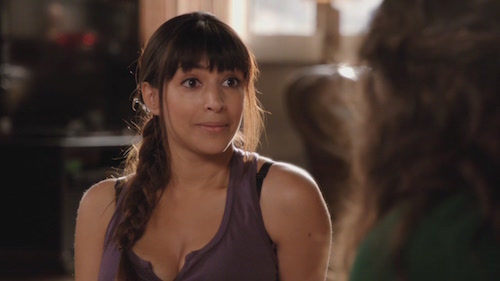 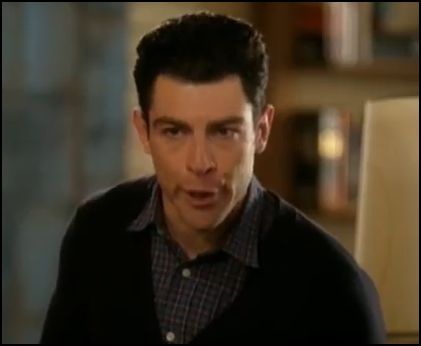 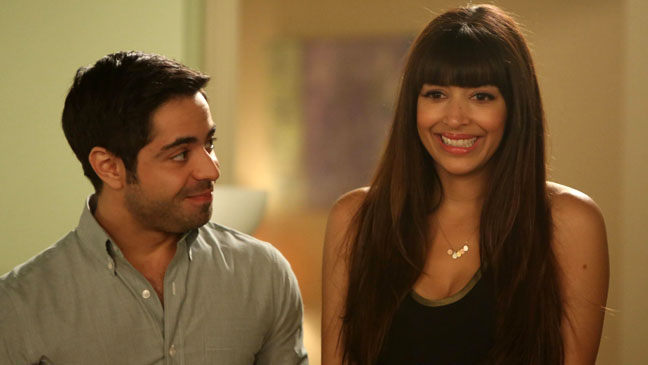 I will quote from Wikia on this show. “[CeCe’s] parents are of Indian descent, but Cece was born in Portland, Oregon. She enjoys going to clubs and dancing, but she eats healthy and exercises to maintain her appearance, as she enjoys her career as a model and takes her job seriously. ”

Let’s begin to look how the white directors and writers of this show depict the uneven relationship between the white male and the Indian female: “Schmidt is still thrilled to have Cece in his kitchen, and is trying to teach her the best way to mash potatoes. Seductively, she smothers a handful of mashed potatoes on Schmidt’s nose, and he proceeds to yell at her….Cece tells Jess that she thinks she’s into Schmidt because he yelled at her. Jess is instantly grossed out before she goes over to talk to Paul, whose been tuning his violin in preparation for a performance that Nick is especially not interested in watching. Cece goes back to preparing food, and seductively admonishes Schmidt for yelling at her. ” 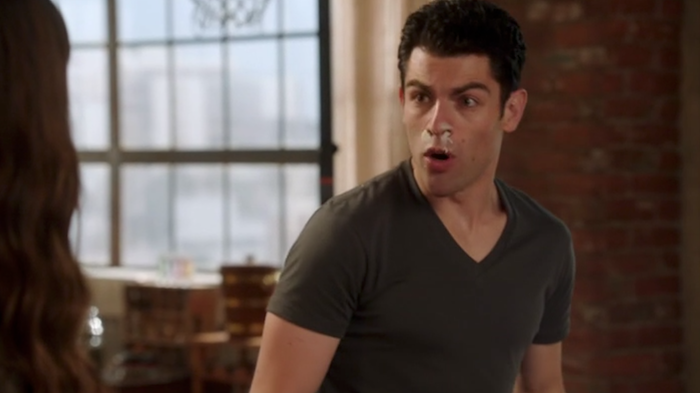 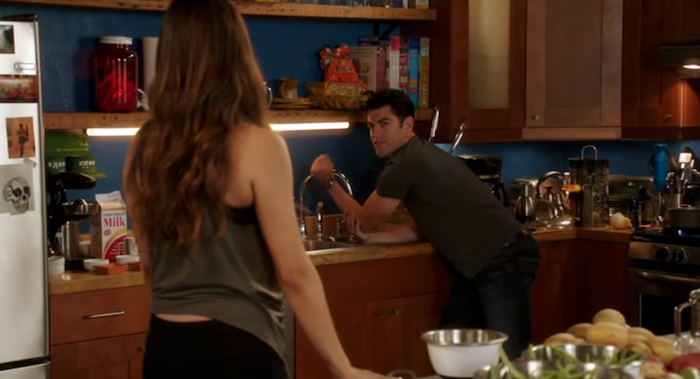 As you can see, the worse whites treat us, the more we are supposed to be drawn to them. A concept known as traumatic bonding. Or perhaps what they are saying is that we should be attracted to them no matter how they treat us. Hollywood depicts a cause & effect that subconsciously conditions the audience. Meanwhile, they don’t hesitate to show the Indian as being ‘dirty’ and ‘unclean’ while the white has to correct the uncivilized CeCe on how to behave. During this scene, Schmidt glares at CeCe and calls her accusingly “Beautiful savage“.

Later, CeCe is introduced to Shivrang (an Indian male played by Satya Bhabha). Satya’s choice to play this role is questionable as we will show. During their courtship, CeCe routinely humilliates Shivrang, showing her undying interest in Schmidt, emasculating Shivrang, and often acting as though Shivrang is not even in the picture, his feelings are unimportant. In one scene: “Schmidt begs Cece to tell him, in front of Holly [and Shivrang], that she’s still in love with him, and she obliges. “I’m only going to say this one more time. I always have, and always will, love you,” she says flatly, but the look on her face gives away that she really means it. Exasperated, Shivrang calls it the most elaborate way anyone’s ever tried to get out of dating him, but she leaves with him, and Schmidt sleeps with Holly.”

Here CeCe tells another man she loves him right in front of Shivrang while they’re together on a date. All Shivrang can do is sit impotently in the background and observe. As you can see from the picture at the top of the article, Shivrang is shown as a stereotypical Indian man: short and not that great looking.

Later (Shivrang and CeCe are dating steadily), the following scene happens: “As the gang participates in physical chemistry exercises, Schmidt enjoys watching Cece move a hula hoop across her body. As the day wears on, she tries to get to know other men, but can’t avoid Schmidt’s overarching presence. …Cece watches solemnly as Schmidt throws back a drink and steps up to the microphone. He calls the men in the room idiots for failing to notice a beautiful creature like Cece. As he steps down from the mic and walks away, she smiles to herself as she is crowded with a handful of men.

Late that night, Cece sneaks into the loft. She’s elated for what Schmidt said at the convention, because she left with plenty phone numbers, but she’s about to sleep again with him, unbeknownst to anyone. She’s so excited about it, she even let’s him wear a turban. As far as she’s concerned, it’s a one-time thing and she still has every intention of marrying an Indian guy.”

OK, let’s recap. The white directors of this show want to make it clear that white men have higher social status, that they have an “overarching presence”. Despite that CeCe is seeing Shivrang, she is overwhelmed by the white male. She sleeps with him and, in perhaps one of the most insulting scenes I have seen on TV, Schmidt mocks Indians and the Indian culture by wearing a turban while having sex with CeCe. It is obviously a gag and meant to humilliate and stigmatize Indians. Asians are justified in being stunned this is happening to us in the 21st century.

Shivrang proposes to CeCe and CeCe says “yes”. But what happens next is typical Hollywood deception. Hollywood wants to represent a false reality of what Indian culture is like. They represent Shivrang and CeCe’s pairing like an age-old ‘arranged marriage’ stereotype where the bride and groom don’t have sex before marriage and barely see each other. This is not even true in India anymore, where the couple meet many times and gauge their compatibility. It is certainly not true in the US where this scene takes place. Hollywood does this because they want to convey to Asian women that they are ‘stifled’ by tradition (which they break out of by dating white). However, Hollywood’s “Indian tradition” is far from the real thing. Nonetheless, as you will see, they play on this theme as a reason CeCe is ’empowered’ for ditching Shivrang.

Scene: “Cece is nervously chatting with Shivrang’s grandmother and aunt, who’ve come from India to help plan the wedding. Shivrang can tell that she’s stressed out, so he tries to comfort her by reminding her it will all be over soon, and he makes popping noises with his mouth to indicate that they’ll be able to have sex. Cece is mildly disturbed by his sound effects, and she realizes that she won’t be having sex with her husband until after they’re married.”

Is it obvious by now how they are a) depicting Indian culture (incorrectly) as bizarre and insulting to the woman, and b) showing what a dork Shivrang is ?

“They’re interrupted by a knock at the door, and Schmidt barges in, past Shivrang, to confront Cece about his lack of a plus one. He’s rude to Shivrang’s family”. Here we see the white “alpha male” act as though the Indian male does not exist, and he can barge past him and assert himself as he likes. He can mistreat other Indians and yet as we’ll see CeCe is still attracted to him (perhaps just as she was attracted to him yelling at her earlier).

“Ankita G is barely impressed when she walks into the loft and the girls are chanting at Cece to “pin the dong on the Shivrang.” Cece is mortally embarrassed by her suddenly unwanted surprise. As Ankita goes to the bathroom, Jess and Sadie urge her to pin the dong, and Cece blurts out that she has yet to see Shivrang’s penis.” Again- the depiction of Indian culture as ridiculous and undesirable.

“Jess reports that he and Winston need to figure out a way to get a picture of Shivrang’s penis for Cece, and he’s mortified. But she tells them that they can end their awkward night and come home the minute they accomplish their goal, so they accept, and throw him a “bachelor party.” Imagine if you’re an Indian woman and you see all this. You see the idea of marrying an Indian male as a humilliating process. Why would you endure it?

Despite all this, the wedding dary arrives. But Schmidt and his lackeys have plans to disrupt it. Winston, the only black character of the main cast, takes orders from the white male, Schmidt.

“Winston startles the horse that Shivrang is riding in on, and it takes off, with Shivrang, down the street.” Schmidt and Winston bully and humilliate the Indian male and he is defenseless. In doing this, they also poke fun at the Indian practice of the groom riding horseback. As if this is not embarassing enough to the Indian guy, Shivang yells out “Ow, my testicles!” because hey, let’s all laugh at the Indian guy. 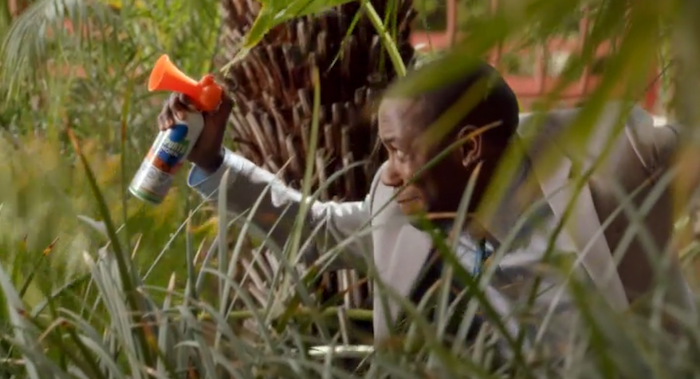 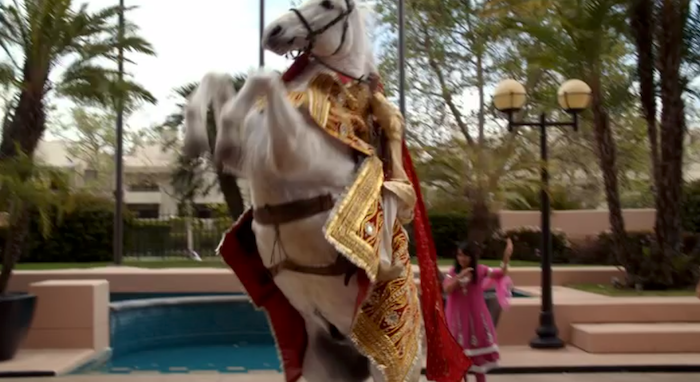 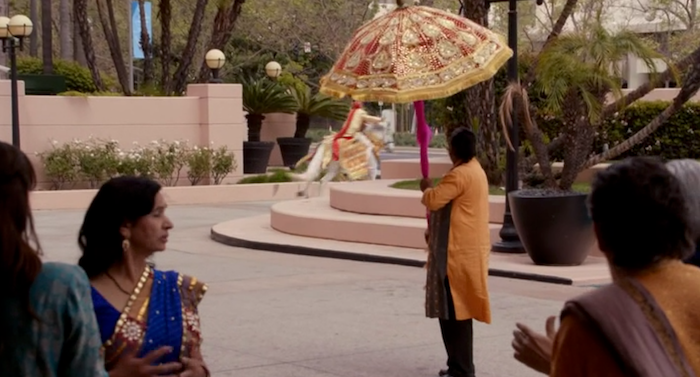 More of this: “They manage to get Shivrang back in one piece, and the wedding gets underway. But as Cece is walking to the altar to start the ceremony, traditional music is interrupted by loud blasting of “Cotton-Eyed Joe.” The bullying continues.

CeCe dumps Shivrang as they are going through wedding rituals. “But Cece looks sincerely at Shivrang, turning to the assembled guests and announcing that she couldn’t get married. She says that she’s calling off the wedding becaus eit’s not what she wants – she says she wants to be with someone else.”. She says this while looking with desire at Schmidt. 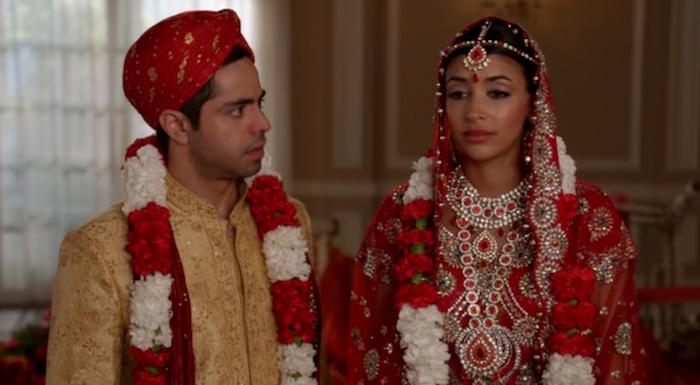 In order to patch this up, the directors claim Shivrang is fine with it- he loves someone else too. That other person happens to be Taylor Swift- an impossible arrangement, that is purposely ridiculous so as to not be believable. It is a gag, like everything else directed at Shivrang on this show.

I think what’s important here is that in so many shows- Royal Pains, Sense8- the Indian woman breaks it off with her Indian fiancee for a white guy. But the white guy doesn’t stick around. The same is true here “In the morning, Schmidt is making plans with Elizabeth for the night”. Schmidt didn’t even commit to CeCe right after she walked out of the wedding for him; he remained non-commital and continue to date both her and Elizabeth.

It seems Hollywood wants to condition white males asserting themselves in the lives of Indian women, as a form of power and sexual dominance, and this continues on that the Indian woman would leave her Indian dud for a white guy even if he’s non-commital. Indian women should fall under the spell of white men – this is the ‘life script’ that Hollywood reinforces again and again and again. The love of an Indian man is worth less than the mere sexual interest of a white male.

Shivrang is shown to be a “typical Indian male” (by Hollywood standards): awkward, not that attractive, weak, a ‘creepy’ nice guy, unsexy. Do you see how the way Hollywood brings the Indian male across could trigger the thought of the viewing female audience when considering an Indian guy: “Ewww…no”? In addition, the Indian guy apparently carries with him the supposed baggage of Indian practices from the 16th century- a clear burden for the modern woman.

In real life, Indian women marry Indian men in America over 70% of the time. But in Hollywood, that’s not the case. They want to tell a different story and encourage Indian women to be short term sexual options for white men. Doing so is vital to avoid a “lame Indian guy” and a “sexist repressive Indian culture”. 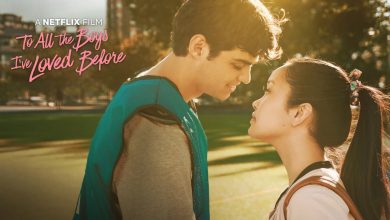